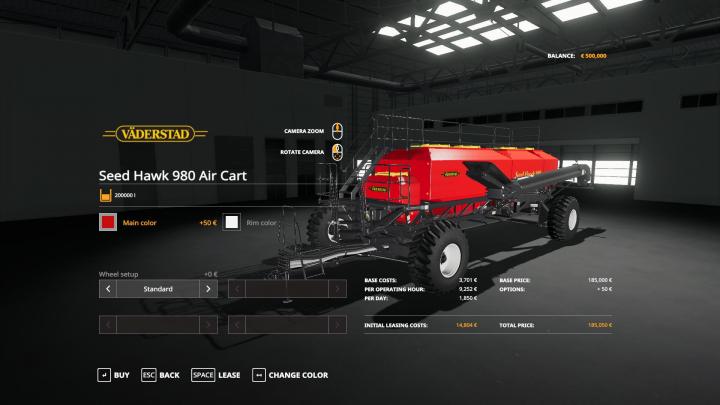 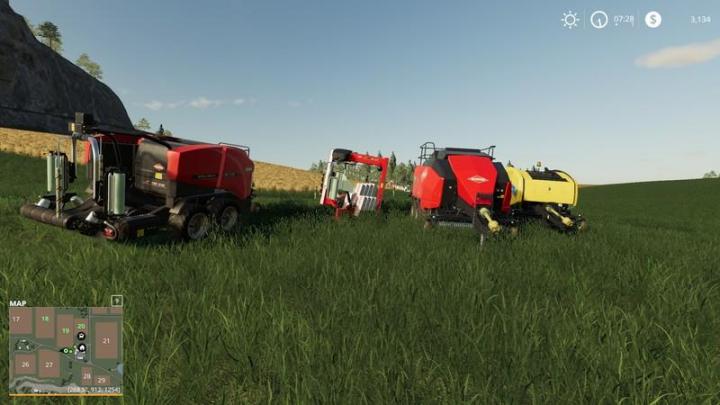 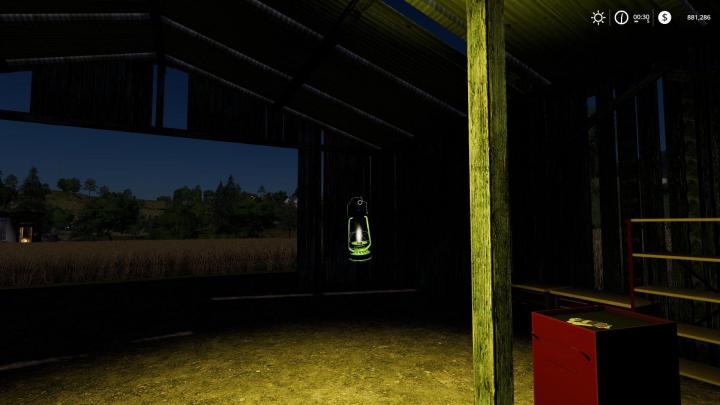 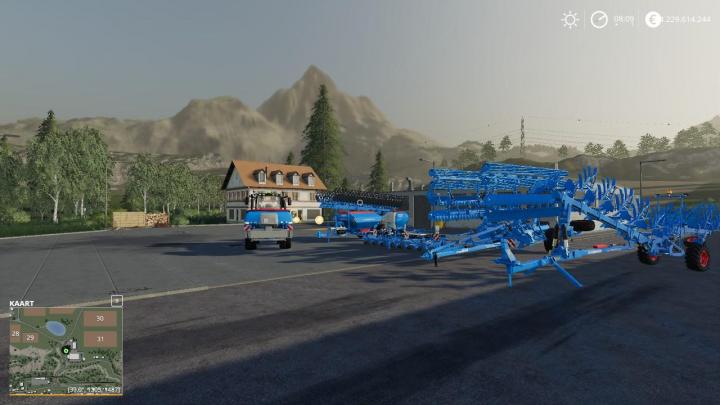 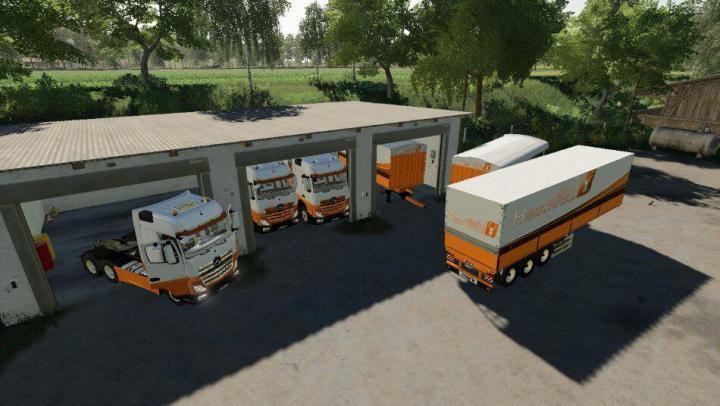 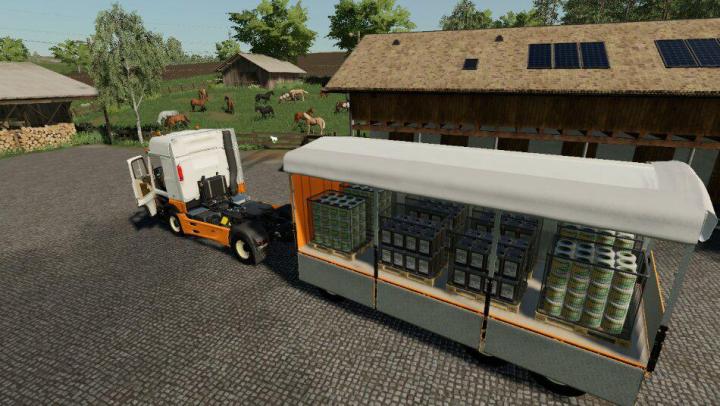 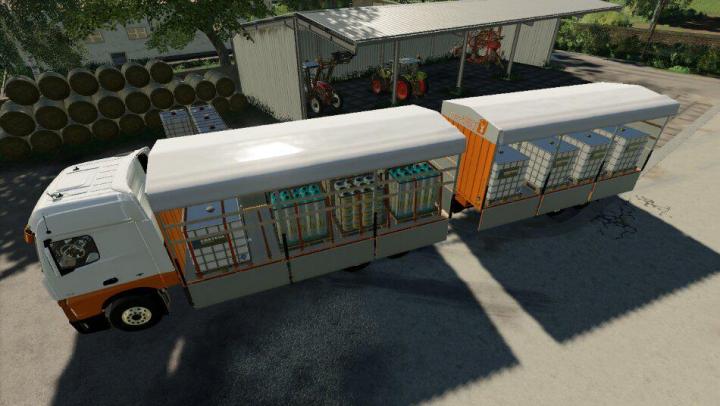 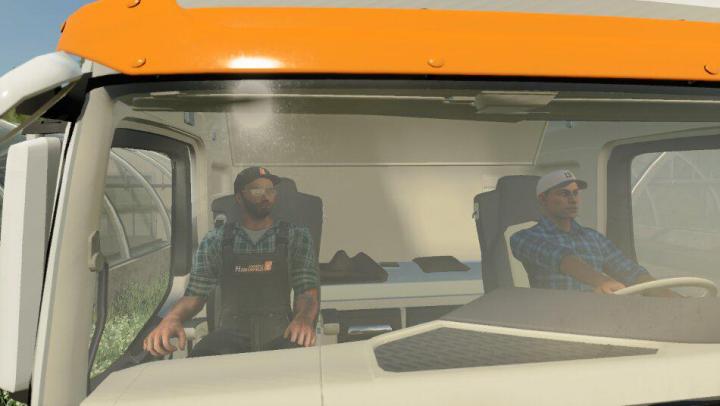 ModPack consisting of the Mercedes-Benz ACTROS MP4 25XX with tarpaulin, the ACTROS MP4 18XX and 26XX as two- or three-axle semi-trailers, Kotte tandem trailers, Kröger turntable trailers and Schmitz semi-trailers.
LS19 Platformer Pack Mario Hirschfeld Edition FINAL
Important: This mod pack may not be changed and may not be offered in other forums without my consent
This ModPackage was created in collaboration with YouTuber “Mario Hischfeld” and is an exclusive edition. There will be no further editions!
The heart of the package is the MERCEDES-BENZ ACTROS MP4 25XX with a tarpaulin body.
It is completely animated and is controlled by Modellicher via “SimpleIC”.
Doors, window panes, sun shades, armrests, etc. much more.
The construction of the tarpaulin is also animated. Unfold drop sides, open tarpaulins, remove bows, etc. other things go through SIC and buttons.
The third axis can be raised and lowered with SIC.
The Mercedes has the AutoLoad function. As standard, it can independently load and unload square and round bales, pallets and egg cartons and cotton packages and all bales and pallets from the “Straw Mountains Add-on”. Also with the forklift or similar. he can be loaded. (Attention: the side walls have collision)
There are different engine variants, 4 tire sets, and a free choice of color for the rims.
This included 2 trailers: a KOTTE tandem axle and a KRÖGER turntable trailer. Both have the tarpaulin structure and the AutoLoad function. They are also animated via SIC and buttons. The semi-trailer from SCHMITZ-CARGOBULL with 3 axles, whereby the first and third axles can be moved with SIC. Tire selection and operation of the tarpaulin and drop sides, warning signs for dangerous goods loading, loading space lighting, etc.
The MERCEDES-BENZ ACTROS MP4 18XX and 26XX semi-trailers.
You have 4 tire configurations, free choice of rim colors, different spoiler configurations and there are different engine variants.
The animated fifth wheel can be moved using SIC and mousse controls. The 26XX has a movable lift axle that is animated with SIC. Both have special truck hydraulic hoses that connect to the semi-trailer. (Usually the hydraulic hoses are on the trailer).
All trailers now have “RealLights”, which strangely enough is not standard!
Almost all animations are stored with sound files, which is made possible by the script “ExtendedAnimationSounds” from the Ifko [nator], for which he has given me the approval.
The mod “Simple IC” from Modelleicher must be in the mods folder, namely version 0.9.1.7